In 2012 the two companies entered into discussions regarding challenges of the current market environment which eventually led to a merger in October of 2013. The newly formed company was formed as Farmers Protective Mutual Insurance Company. As a tribute to the legacy of both companies, FPMI continues to provide coverage’s for our Rural Partners today across the state. Both locations are proud to be the oldest business in their respective Home Towns! 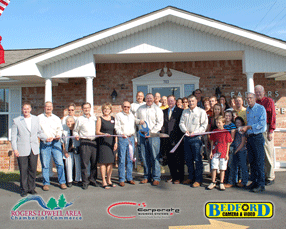 In 1909 a congregation of Benton County Arkansas residents met in the school house at Little Flock to form a Farm Mutual Aid Association. They met at various homes and public halls to form the Benton County Farmers Mutual Insurance Company under the Farm Mutual Aid Association provisions for Insurers in Arkansas. The association received their charter and was formed as Farmers Mutual Insurance Company of Rogers in 1911. The company met at First National Bank in downtown Rogers until it relocated above the old Strouds Building. The mutual moved to its present location in 1973 after new construction completed. Several adjacent properties were purchased over the following years and the current building addition and renovation was completed in January of 2011. The company has stayed with its conservative principals in insuring primarily farm and rural coverages. 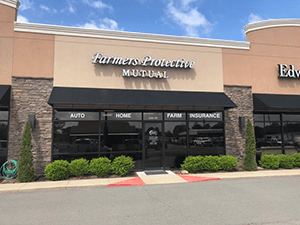 In 1891, several farmers met to provide mutual aid for one another by forming the Farmers Protective Aid Society of Grand Prairie. It was incorporated in 1896 into the company that would later change its name to The Farmers' Mutual Insurance Association of the Grand Prairie. In 1959 the company changed its name to Farmers Protective Insurance Company. The company had been located in an upstairs room of the Majestic Theater (now gone). In 1943 it moved to 214 ½ South Main, over what was then Conn Hardware. By 1956 they outgrew the quarters and on March17, 1956, the directors decided to purchase the property at Fourth and Maple Streets, adjacent to the Majestic Theater. A large two-story house on the site was remodeled for a dwelling and a new, modern office plant was erected between the house and theater. A parking area for policyholders' cars was provided. By 1968, increased business again had the office bursting at the seams. In December of 1969 it was decided to move the dwelling away and replace it with additional office space. The new section was built in 1971, doubling the floor space to 2,500 square feet. In 2014, after the merger, the office was moved to its current location in the newly renovated building at 1920 S Main Suite 102 in Madison Square making it more accessible for the ever expanding membership.